Just because you run a micro-bakery doesn't mean you've attained bread mastery. I'm learning more and more each week, and the learning curve has only grown steeper with Durham's spike in warm weather!

Last weekend, March 17, I let the dough rise too long before shaping it. This weekend, I thought I had a better system in place. I used cooler water, and predicted a 5-hour rise (rather than 7-hour) would do the trick. Besides, whole wheat doughs like this one usually take longer to rise because of the bran in the flour, which works against the gluten. But alas, by the time the dough was shaped it was already full of enormous gas bubbles. These bubbles should have bloomed during the bake and made the bread nice and hole-ly, but they formed too early. Thus, the bread did not rise much in the oven, thus much smaller holes in the bread. I think 3-4 hours of initial rise would have done the trick! 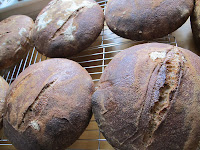 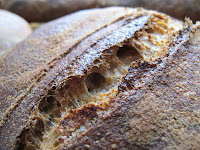 As in the pics, the last batch actually did spring a bit in the oven, but the first eight loaves did not.

Between rain, pollen, and allergies, I decided to deliver bread this week in the car. It was the fourth and final week of the fourth micro-bakery cycle. It's hard to believe, but this has been going running off and on since late October! Thanks subscribers and supporters!

A.D.B. Jones
Durham, NC, United States
LMB is a micro-business located in the West End of Durham, NC. The model: Bread subscribers sign on for four weeks at a time and get a warm loaf of artisan bread bicycle-delivered to their home every Saturday afternoon. Bread varieties rotate at random.