After a few weeks off, the Micro-Bakery is back in action (see exhibit A). 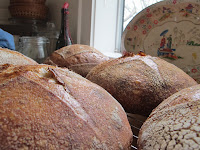 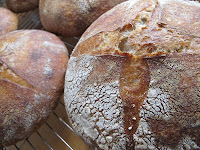 This week's loaf was French Country Levain, a mostly white bread with a mild natural leavening. I call it the loaf from which all others spring and by which all others are measured (at least in my repertoire). Actually this weekend, due to some tough scheduling, I had to add use the levian before it had adequate time to sour, meaning that the bread is good, but more mild than usual.

Rain threatened in the sky as I prepared for deliveries but thankfully the ride was pleasant and dry. Thanks to a good friend I acquired some zip-ties to better secure my milk crate to my bike, meaning that deliveries were all the better (no more milk crate wobbling to and fro while going over bumps). I'm still perfecting my methods for not denting the loaves as I ride around; I hate to deliver a good loaf of bread that looks bruised, even if only a little.

Many thanks to any and all supporters of the Micro-Bakery. I'm getting ready to lead a workshop on bread making and spirituality next weekend – super excited.

A.D.B. Jones
Durham, NC, United States
LMB is a micro-business located in the West End of Durham, NC. The model: Bread subscribers sign on for four weeks at a time and get a warm loaf of artisan bread bicycle-delivered to their home every Saturday afternoon. Bread varieties rotate at random.